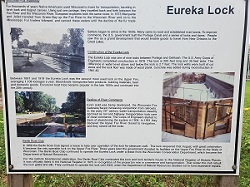 A new sign has been posted at the Eureka Lock. The wording is as follows:

Setters began to arrive in the 1830s. Many came by boat and established river towns. To Improve commerce, the U.S. government built the Portage Canal and series of locks and dams. People saw this as a grand development that would enable goods to travel from New Orleans to the Great Lakes.

The Eureka Lock was one of nine locks between Portage and Oshkosh. The U.S. Army Corps of Engineers completed construction in 1876. The lock is 200 feet long and 35 feet wide. The difference in water level above and below the Lock is about 2.7 feet. The Lock walls were built of cut stone and the lock floor was made of wood planks. Concrete was added during the reconstruction in 1941-42. Between 1897 and 1918 the Eureka Lock was the second most used lock on the Upper Fox, averaging 1,108 lockages a year. Steamboats transported farm products, building materials, beer and domestic goods. Excursion boat trips became popular in the 1800's and continued in the 20th Century.

Even as it was being developed, the Wisconsin-Fox waterway faced increasing competition from railroads. In the20th century water transportation steadily declined as rail and highway transportation took care of most commerce. The Corps of Engineers started think of abandoning the system in 1904. In 1951 they declared the Upper Fox River closed to navigation, and they closed all the locks.

In 1958 the Berlin Boat Club signed a lease to take over operations of the lock for pleasure craft. The lock reopened that August, with great celebration.  It became the only operable lock on the Upper Fox River. Three years later the government donated ifs facilities on the Upper Fox River to State of Wisconsin. The Berlin Boat Club continued to operate the Eureka Lock under a lease from Wisconsin Conservation Department, which became the Department of Natural Resources.

For the nation's bicentennial cerebration, the Berlin Boat Club nominated the lock and lock tender's house to the National Register of Historic Places. It was officially listed in the National Register 1976 in 1976, in recognition of the property's role in commerce and transportation. The water the club rebuilt the lock gates and sills. They continued to operate the lock until 2003, when the Department of Natural Resources decided not to fund expensive repairs.

AD NOTE: New lease agreement with Town of Rushford, State of Wisconsin Rebuilt the Lock 2012 with Loan of $300,000.00 and 100's hours of volunteer help, continues operations now with  our 1,000 of Lock operations, over 2,000 people used the Lock we are proud, this year is our 10 yr anniversary in 2022 of the build. Open with Volunteer help open to the public again.

THE UPPER FOX RIVER
In 1673 explorers Marquette and Joliet visited the Mascoutin Indian Tribe in this area. For many years, traders and missionaries camped here while visiting the Indians.
In 1846 Nathan Strong, a Fourierrite, was commissioned by the Federal Government to select a site for a bridge to reach timberland to the north. Strong selected this location and founded it as Strong’s Landing.
English settlers arrived in 1847 followed by immigrants from Poland and Germany. In 1857 a Community Charter was authorized and the name Berlin was chosen.
From 1857-1890 the Fox River played an important part as a means of transportation. Steamboats carried freight and passengers on the part of the river known as the Upper Fox, which extends from Lake Winnebago to the Wisconsin River Canal. Excursion boats continued to use the river until 1920 when dredging was discontinued.

HISTORY OF THE FOX RIVER & EUREKA LOCKS & BERLIN BOAT CLUB
1673 to 1975
1673 Voyagers Marquette & Jolliet transversed the Fox River from Lake Michigan to Portage and down the Wisconsin River.
1822 First known shipment of lead shot produced at Helena Shot Tower, (Now Tower Hill State Park) to Detroit Michigan by way of the Fox River.
1822 Erie Canal Completed – Use of Durham boats was prevalent on the Fox River at this time.
1837 Portage Canal Co. commissioned to construct a canal between the Wisconsin and Fox Rivers. Work was abandoned after $10,000 expended.
1846 Federal Government granted land to be sold at $1.25 per acre to finance construction of Fox waterway. Hercules Dousman was one of a 5 member board.
1848 Work started on canal and Waterway.
1850 DePere Locks & Dam completed. Other locks probably about the same time on lower Fox River.
1850/1851 Spring high water allowed Steam Ship Aquila purchased at Pittsburgh, Pa. to be sailed down Ohio river, to Mississippi, up river to the Wisconsin, up river to the Fox and down Fox to Green Bay.
1851 Steamers John Mitchell and Enterprise met in canal at Portage and after each blew whistle, withdrew to Wisconsin and Fox Rivers.
1858 River Steamers regularly using Upper Fox River and Wolf River.
1870 After State failed to fully complete waterway, Federal Govt. took over operations and completed all locks and rebuilt the canal at Portage.
1876 Eureka Lock completed.
1877 Eureka Dam completed.
1879 Steamer Brooklyn left Berlin for a 2 day cruise to Green Bay. Cost of trip, food and lodging was $2.50.
1882 Until this date many tons of Montello & Berlin granite was shipped down the Fox River.
1887 Reuben Gold Thwaites early Wisconsin Historian made canoe trip down the Fox River and Published “Down Historic Waterways” in 1888.
1890 Freight and Passenger services on the Fox River flourished.
1900 Until early plastics replaced clam buttons, Fox River clam fishing was an important industry. The left over clam shells were the ground up and used in railroad beds.
1930 Steamboat era ended at about this time.
1950 Fox River Boat Club formed by Robert Carter and other interested families for safe river cruises.
1956 Federal Govt. ended operations of locks. Lock tenders eliminated. Lack of funds and usage.
1958 Public Law 500 of the 85th Congress granted to Wisconsin the Upper Fox River consisting of the following: 443.2 acres of land; navigation locks located at Eureka, Berlin, Princeton, Grand River, Montello, Governor Bend, Fort Winnebago and Portage; Five houses plus other buildings. Total lift of 35.3 feet.
1958 Boat club incorporated as Berlin Boat Club, Inc. to save Eureka Locks. Leased Locks from Corp of Engineers.
1958 With the help of Marvin Laird, then Congressman, additional funds were added to public law 500 to repair locks and rebuild Eureka Dam. Dr. Tellefson was Commodore of the Berlin Boat Club at this time.
1958 First Buoys for navigation were put in the Fox River by the Berlin Boat Club, Inc.
1958 Wilbert (Bud) Johnson was lock tender for the club until 1963.
1962 State finally took over ownership of grant. Berlin Boat Club leased locks from Conservation Department.
1964 Louis Maik became lock tender and at present is still employed by Berlin Boat Club, Inc.
1970 Boat slip dredged at Riverside Park and launch ramp installed.
1973 Reenactment of Father Marquette’s voyage up the Fox.
1975 Club started special lock fund for repair of locks as a Bi-Centennial project. Application for Historic site submitted to the State Historical Society.
1976 Berlin Boat Club celebrates Centennial of Eureka Locks and Bi-Centennial of the U.S.A. on July 4 by placing a plaque at the new lock gates.
Historical data was compiled from “Tail of the Serpent”, by Elaine Reetz Berlin Public Library, and Paul Guard..